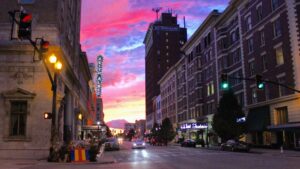 We are happy to announce that the celebrations in the six model Rosie cities went well. People gathered to ring bells and to celebrate the lives of the Rosies. Thanks! Plain and Simple is proud and thankful of every involved! See our press release below from the leadup to September 3rd to get more information on the celebrations that took place.

CHARLESTON, W.VA. (US). Six cities will celebrate being named Model Rosie Cities for doing significant work over the last five years with Thanks! Plain and Simple, Inc. (“Thanks!”) and Rosie the Riveters (“Rosies”).  See www.AmericanRosieMovement.org for their past work.

Celebrations are noon to 2:00 Sept 3, except for Philadelphia on Sept. 6 (Labor Day).

While these cities celebrate with Rosies, people will ring bells for Rosies in Europe, across America, and in Australia at 1:00 p.m. their time, to say, “Wake up!  Pull together as Rosies did and are still doing. Let’s use our freedom to do meaningful work together.”

Anne Montague, Executive Director of “Thanks!” says, “Each city has done very different work to thank Rosies and complete small-to-large projects that fit into a larger picture. Today, we see ‘We can do it!’ because we are doing it.”

Rosies agree. Ruth Edwards, a 99-year-old Rosie in Greensboro, NC was an expeditor at Carnegie Illinois Steel during the war. She says, “We Rosies show what people can do when we pull together to face big problems. It takes dedication and good management to use our freedom to do what must be done.” June Robbins, a 94-year-old Rosie in Philadelphia drafted ship parts. She says, “We call ourselves ‘Rosies’ for two reasons. First, most of us were not riveters. Second, rosie means positive. When we are positive, realistic and unified, people will face big problems.”

The American Rosie Movement is in three phases – past, present, and future. The present phase is to launch the movement fast and permanently. The upcoming events are clear indication that people who care about freedom will cooperate.