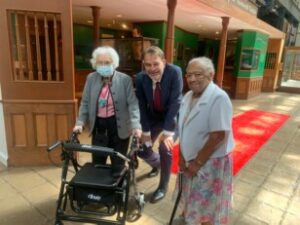 A red carpet was rolled out for two American treasures on September 3 in Washington, DC.  At the National Museum of the U.S. Navy, two fascinating ladies showed a diverse audience that It is possible for people to pull together.

The treasures were Hilda McDougald and Evangeline (“Vangie”) Parades who worked for defense during World War II.  Many Americans call such home front workers Rosie the Riveters.  Yet, they often prefer to be called “Rosies” because most were not riveters.  Hand outs included several Rosies who could not make the day.

At 12:30 p.m., Anne Montague opened the day by saying that the nonprofit she founded, Thanks! Plain and Simple (“Thanks!”), has worked over 12 years to find Rosies, capture their stories, and work with many partners and places create projects that leave a lasting record of Rosies and their legacy. She said, “The more I worked with Rosies, the more I realized that they tell us even more than their critical work in factories, farms, shipyards and offices. They also say they pulled together to do high-quality work fast, and they did it cooperatively. I started asking them if unifying to do excellent work was important.  They always said, ‘Yes!’  Thus, their legacy is not just history but how to unify today and tomorrow  to face big, new problems.

Standing my Anne’s was Bill Kaemmer, Expeditive Director of the Chapel of the Four Chaplains located in the Philadelphia shipyard where many Rosies worked.  He said that Philadelphia, one of the six Model Rosie Cities, would hold their event on Labor Day in the chapel, where a special bell would be rung, and afterwards, they would go to the waterfront and place a wreath in the water.  People began to see that each Model Rosie City has created its own way to honor Rosies, while all locations pull together to make a statement for the Rosie Legacy.

The three dignitaries who presented next were unquestionably proud of Rosies and aware that this was a special tribute. Rear Admiral Michael Steffen thanked Rosies everywhere and told us that wartime production there was the largest in America.  The Ambassador of the Netherlands, André Hospels, said that the Dutch are eternally grateful for Rosies, and that planes build by Rosies not only helped defeat the Nazis, but they delivered food that his grandparents needed to live.  Laura Newland, Director of Washington’s Department of Aging and Community Living was clearly proud that her agency had found Rosie who had done critical work for the government.

A significant moment came next. To memorialize Vera “Bobbie” Lamb, the first Rosie for whom a bell was rung in 2014, a recording was played of her son’s phone call to Anne when his mother died days before Memorial.  His words were:

“Anne, this is Arnol Lamb. I want you to know we air-lifted Mom from the North Carolina hospital to Buckhannon, West Virginia in an hour yesterday.  Then, we got her to home and her own bed in Elkins.

Dignity and human spirit connected at that moment.

Then we shared a minute of silence.

Kindra Fox, the first person to ring a bell for Rosies, led us in ringing hand bells.  Quickly, Admiral Steffen stepped up and rang the historic ship’s bell.

After the bells silenced, Anne pointed out that while we were ringing bells, two other occasions were occurring to honor Rosies. First, at 1:00 p.m. in many places in America and other nations, people rang bells as statement for waking up and unifying. Second, four other cities were celebrating that they are Model Rosie Cities based on their excellent work with Rosies over more than five years – Brunswick, Maryland; Nijmegen, Netherlands; Huntington, West Virginia and Camden/Bishopville, South Carolina.  The audience grasped that the cities were north and south, big and little, European and American, and celebrating in different ways, while they were unified around Rosies and their legacy unifying to do work that must be done.

Needless to say, the highest point of the day was hearing the two Rosies.  Each “stole the show” in her own way.

Evangeline Parades told of being privy to highly secret correspondence between national leaders during the war and her volunteering with the Embassy of the Philippines for many years after the war. The audience visibly agreed when she said, “I’m donating my brain to science!”

Hilda McDougald told of being born in Louisiana with a French surname, picking cotton as a child, and coming to Washington with thousands of other women to work for the war effort. She worked for the Treasury Department canceling checks through World War II. After the war, she worked for the Veteran’s Administration as a key puncher to ensure that veterans received their paychecks.  Again, the audience agreed when she said, “Every job is important!”

Anne asked me to come forward and sit with her in one of the dignified navy-blue wing-back chairs that special people had sat in.  I held a large framed photo of my grandmother, Rose Sheliangian, as we discussed that Rose’s parents barely escaped the Armenian Christian genocide, about her pride to work for the war effort and to be an American citizen, and that she died from COVID19 last winter.

Then, Dr. Faye Williams explained the meaning of her radio program called, “Wake up and Stay Woke!”, and her asking listeners to “Help us find our Rosies!”

In a lighter, yet sincere, mood, Murray Horwitz, host of WAMU’s “The Big Broadcast” spoke about the importance of radio during World War II. He said that radio programs showed respect for others.

The day closed with Girl Scouts from two troops in Glenville, West Virginia who joined arms and rang bells to express, “Wake up! Pull together to find Rosies and do lasting projects that honors these authentic, important women while we can.”

Anne gave the final message “Arm-in-ARM we move on!”, which is the American Rosie Movement’s mantra.

A furry of people posing with the two Rosies yielded some precious photos.

Later, as I read Anne’s speech, which had been handed out, I realized that Anne never gave her speech.  I wonder if she really expected to deliver it or just left it in writing hoping some would read it.

After the event, I asked Anne what she remembered most. She said, “The Rosies, of course.”  She said she wishes she could be with Rosie and those who help find them and know them, but because “Thanks!” is still understaffed organization, she must spend most of her time doing administrative duties, such as making sure all records are safe, finding and supervising workers and volunteers, and answering emails.  She added that she wished she could thank everyone who helped, especially those behind the scenes.  At that moment, I understood better the name of the organization, “Thanks! Plain and Simple”.

I am thankful for having a way to include my grandmother in a shared effort.  I met sincere people, such as the volunteer who took a day off work to transport Vangie Parades to and from the event.  I hope to be part of whatever happens next to connect people by working on Rosie projects together. – Paul Vartan Sookiasian

Check out the great interview Operation Confidence did with Hilda McDougald (starts at 23 minute mark): https://www.youtube.com/watch?v=wSvjNZGQnX4&t=2381s